What you are about to read is NOT real news. It is satire. Where possible we have provided links to the real stories/issues that inspire us at the bottom of each article.
Follow us on Twitter @Students_Last

Grin and Bear It: Teachers Paddled in Texas

Laredo - A New York Times editorial entitled, "Carrots and Sticks for Schools" called for rewards for "good teachers while easing chronic low performers out of the system."  What they apparently didn't know is that a small charter school in Texas beat them to it - literally. 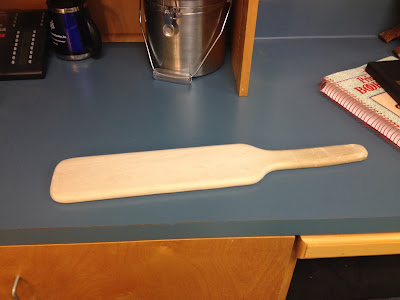 "When the principal first told me to bend over and accept the paddling, I thought he had lost his mind," recounts Jeremy Finn of Harmony Science Academy in Laredo.  "But now I understand and can even see that he was right.  When my students do well on tests, I get rewarded with coupons for food." And when they don't?  Finn bows his head and recites, "Well then I haven't done my job and deserve to be paddled."

Food coupons entitle teachers and their families to eat for free at local eateries such as Sonic Drive-in, the Corn House and Posh Sushi Express. Fifth grade teacher Mary Robinson, who amazingly hasn't had a student fail a test in three years, speaks very highly of the program. "I'm uncertified so I get paid less than other teachers and the coupons really help my family make ends meet."

"The system works for us," smiled James McFadden principal of Harmony while brandishing an long wooden paddle.  "Usually I only have to swat a teacher once and then they learn to get those kids to pass the test but fast....or they quit."

Turnover has been high at Harmony with more than 75% of teachers leaving during the 2011-2012 school year, the year the school first began sticking it to teachers.  However, with only minor improvements in the economy, many educators feel they have little choice but to grin and bear it. Last year, turnover was just over 40% and McFadden thinks that number will go down farther still.  "As long as you hire young teachers, they don't know any better."  As for the older ones who have hung around, principal McFadden has his own theory, "I think we have a few staffers who like it."

The paddles were paid for by a generous grant from the Walton Foundation while a soothing balm is distributed courtesy of the Bill and Melinda Gates Foundation.

Reality Alert: Interested in how we came to write this? Read NYTimes here.
Posted by Students Last at 1:22 PM

Should corporations be allowed to "place" products on state exams?

When should we begin administering standardized tests to students?

Do you agree that teachers suck more than they used to?

Should teachers be paddled when their students fail a test?

Other Sites of Interest